The Sportsman EX Crossbow is a weapon used by Cate Acher as she infiltrates the Dumas Towers in England. This weapon silently fires crossbow bolts with deadly accuracy. It can be fitted with a scope with single zoom capability.

Crossbow is the fittest weapon for a stealth based mission as its ammunition can be replenished from dead bodies and completely silent; lure suspicious enemies to the dropped body as they haven't heard any gunshot. The downside of Crossbow be its long reload time and punishing missing by making bolt unretrievable with its already low ammunition count when you first pick it up.

As it is completely silent, by other aspects it can not any form or way contribute to a large fight when enemies are alarmed and pushing at your position. While a bodyshot Cyanide-tipped bolts can alleviate the situation when you missed your first shot against a single heavily armed enemy, Explosive bolts or Lipstick Explosives should be used when confronting large crowds.

Once this weapon has been introduced in Safecracker, the player can select this weapon before any mission.

While on vacation on an island in the South Pacific, Archer was able to break into a secret H.A.R.M. facility housed inside an active Volcano. There she found a crossbow and scope.

While the weapon was found in a H.A.R.M. facility, it was never seen used by H.A.R.M. personnel. 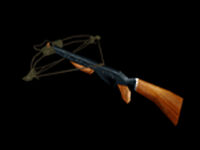 Retrieved from "https://nolf.fandom.com/wiki/Sportsman_EX_Crossbow?oldid=8295"
Community content is available under CC-BY-SA unless otherwise noted.