The M79 Grenade launcher is a weapon that is available in The Operative: No One Lives Forever. It shoots High Explosion (HE) grenades which are capable of dealing so much damage that one-shot kills are not uncommon with this weapon. You can carry a maximum of 25 grenades.

It is a very slow weapon in every aspect: with its grenades traveling at a very low velocity, projectiles have a hovering wind up when shot before gaining speed and weapon itself suffers a long reload time. This weapon won't do much good in close-quarter fighting or as a main weapon when trying to do a stealthy approch. Absolutely, when shot to enclosed spaces from far away, such as guardtowers or small rooms from an angle; it can catch a group of enemies its large blast radius and alert anyone who are nearby and still alive within' its earshot.

Cate Archer encounters H.A.R.M. guards that are armed with the M79 Grenade Launcher while trying to rescue Dr. Otto Schenker from a secret facility found in the state of Washington.

Once this weapon has been picked up, it can be selected before the start of any mission.

On an island off the coast of Mandaru, Archer encounters another H.A.R.M. guard armed with this type of weapon.

Later, Archer is confronted with more H.A.R.M. thugs brandishing this weapon as she attempts to infiltrate the Dumas Chateau in West Germany. 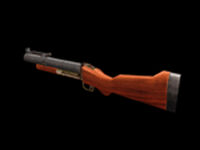 Retrieved from "https://nolf.fandom.com/wiki/M79_Grenade_Launcher?oldid=8970"
Community content is available under CC-BY-SA unless otherwise noted.