The M-9 Data Processing Unit is a mainframe computer used by the Soviet Army located at a base hidden within the Siberian region of the Soviet Union. It is primarily used for data storage and processing.

Once Archer was able to infiltrate the Main Records Building, she discovered that there were two items she needed in order to access the M-9 Data Processing Unit. The first was a Computer Vacuum Tube (found in the basement) and the M-9 Security Code. Once she finds these items and visits the M-9 Data Processing Unit room, she quickly discovers that the room transforms into an elevator taking her up to the central archive. Within the archives she can enter in numbers randomly to the M-9 Processing Unit or she can locate a letter with the code for Project: Omega.

After Archer has escaped with the information on Project: Omega, Bruno Lawrie has the UNITY Intercept Team parachute in to conduct a raid on the base. Their goal is to set Explosives and destroy the M-9 Data Processing Unit.

This mission to destroy the computer is in the co-op mission The Super Computer.

The following information was found on tape 689 in the central archives. 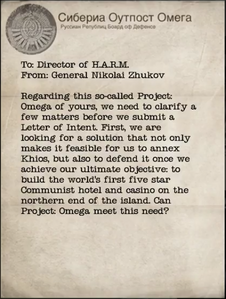 Archer found the following entries on the M-9 Data Processing Unit by typing in numbers randomly.

Retrieved from "https://nolf.fandom.com/wiki/M-9_Data_Processing_Unit?oldid=7877"
Community content is available under CC-BY-SA unless otherwise noted.