"I'm impressed. I didn't expect you to make it this far."
-Isako

Isako was the leader of the Katakuri Ninja Clan that operated out of Inotakimura, Japan. She and her clan serve as killers for the Director and H.A.R.M., primarily out of duty than a sense of allegiance. The Director had stated to dinner guests that he must manipulate Isako much like a little dog (much to the anger of some of the clan members) but also recognized her honor and competence in his happy birthday note he had written to her (as later found by Cate Archer). Much to her happiness, she has been freed by the operative.

In her earlier years, Isako was alone on the streets of Kyoto (after her parents had been murdered) when she was found by an old woman and her daughter (whom at the time was the head of the Sakuragaoka Ninja Clan) where Isako was trained in the ninja arts. When Isako turned 14 years of age (around 1958), she was sent on her first mission. She was tasked with killing a merchant who was kidnapping girls to turn them into prostitutes for his gambling dens. However the mission was a trap set up by the man who hired the ninjas for the task and Isako was captured before she could complete the assassination. Before the merchant could dispose of Isako, his European friend (The Director) asked if Isako's life could be spared so that she may work for him. Thus the deeply honorable Isako felt she owed a great debt to The Director. She turned down several offers to betray The Director out of this sense of duty.

Isako was given the task to kill Archer in Japan. While The Director was resting, she noticed the spy and raised alarm. She ambushed and stabbed Cate, while apologizing for it, but Archer survived the stab wound. At H.A.R.M. headquarters Dmitrij Volkov mistrusted her and didn't believe in Archer's death because there were no proofs, so Isako looked at him contemptuously, unwilling to stay there. She asked The Director, if she was freed then, but he said that H.A.R.M. was her destiny.

When it was discovered that Archer had survived, her boss scolded her for not killing her and unwilling to do it. Isako told him that she wasn't her enemy. However, she and her ninja clan were sent again to complete the task tracking her down to Akron, Ohio. Isako's ninjas swarmed the home of Melvin Blitzny and flushed Archer out to the nearby Serenity Valley Trailer Court where Isako confronted her once again. The two battled in a Mobile Home that had been picked up by a Tornado. Archer was able to rebuff the attack and Isako escaped by using her Umbrella to fly off into the storm.

It was revealed that Archer had been alive again, but later she got captivated. When Cate Archer had to be killed in Man-Handler and Isako had to activate it, Isako refused to use it and went away. The Director started disliking her, which is seen in his letter to Volkov, where he wrote that the mimes and the ninjas had been ineffective and he should hire The Australian instead. Later, when Archer had escaped the H.A.R.M. Headquarters, Isako confronted her on the grounds of the Fujioka estate. After a pitched battle between the two rivals, Archer once again emerged victorious.

After Isako had failed a third time to kill Archer, she has fallen from grace in the eyes of her master. When The Director tried to shoot Isako for her failure, Cate Archer saved her life by disarming the villain with shuriken. Thus freeing Isako from her bonds of honor to H.A.R.M. She finally could smile and feel freedom. In order to re-pay her debt to Archer, she agreed to stop trying to kill her (symbolically breaking her Katana in half).

It's unknown what Isako will do since now, but she and her ninjas can help UNITY. The Swordswoman could be a good partner for Archer.

Isako's primary weapon is the Katana. She had one of these swords hidden in the handle of her umbrella. She was also able to use this umbrella to ride out the winds of a tornado. Isako is also skilled with the use of the Shuriken and the ninja Smoke Bomb. Isako could jump high distances when needed. She's very goot at stealth, being able to get away unnoticed and to ambush suddenly.

The Director: I was wrong to have spared your life all those years ago.
You've been nothing but a disappointment. Sayonara [Is about to shoot Isako]
[Cate disarms him by throwing a shuriken, then he uses smoke bomb to escape]
Archer Are you all right?
Can't say much for your taste in employers.
Isako: He was like a father.
Archer: You're better off as an orphan.
Isako: I am in your debt.
Archer: Then will you please stop trying to kill me?
What's wrong?
[Isako symbolically breaks her katana in half]
Isako: Nothing is wrong
Archer: Well, I'm late to a war. Sayonara. (Befriending Cate in End Game, Scene 4)

Master of the katana 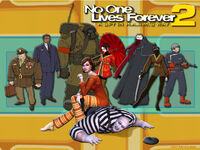 Isako with umbrella alongside the other characters
Community content is available under CC-BY-SA unless otherwise noted.
Advertisement