"What did she look like anyway?" "Very large, with bright rosy cheeks. Dressed kinda like a milk maid."
-Sailors on the freighter Lorelei

Because of her distant, but unproven, kinship to renowned composer Richard Wagner, Inge Wagner endured tremendous pressure as a child to become an opera singer. Unfortunately, she's completely tone deaf and never had even a remote chance of succeeding in this endeavor. Nonetheless, her doting parents encouraged Inge so relentlessly that the unwavering adulation eventually transformed her into a self-obsessed, neurotic diva with insufficient talent to earn a living in her chosen profession. Rumor has it she turned to crime in order to make ends meet. UNITY had a file on her. It stated that she had several run ins with the West German authorities initially involving complaints about her impromptu public concerts, but eventually blossoming into allegations of smuggling, extortion, money laundering and even murder. She was suspected of being involved with H.A.R.M. which wasn't confirmed until Cate Archer infiltrated Wagner's nightclub.

The Operative: No One Lives Forever[]

In The Operative: No One Lives Forever, Wagner is the main attraction at the nightclub Das Einsame Valkyrie in Hamburg, West Germany where she frequently sang operetta. Wagner drugged Archer with a dart injecting her with the biological explosive developed by Dr. Otto Schenker. However Wagner set the wrong fuse. Instead of ten hours, she was injected with a fuse of ten days.

The members of the Elite Guard did not like Inga Wagner. They had a vandalized poster advertising one of Wagner's concerts at the Pump N Go Gas Station hanging in their lair.

During the Safecracker mission Wagner was practicing the Ride of the Valkyries by a radio in the Dumas Towers construction site. She was dressed in bulletproof Valkyrie armor which makes her nigh invincible. As Archer was infiltrating the construction site, she encountered Wagner with H.A.R.M. workers and defeated her in battle, killing her in the process. 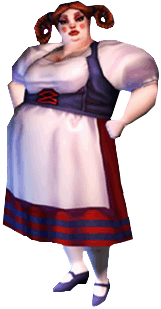