The Operative: No One Lives Forever
Contract J.A.C.K.

The Gordon 9mm Submachinegun (Sterling SMG) it is chambered for 9x19mm, has a 30 round magazine capacity. In the first game of the series it can use FMJ, Dum-Dum, phosphorus, and cyanide-tipped ammunition. H.A.R.M.'s henchmen also use it frequently in the later levels.

No One Lives Forever[]

The weapon is one of the very common SMG types you can encounter in the middle of the story mode, used by many H.A.R.M henchmen. It's loud, alerting and has high recoil even on short burst firing which makes its damage somewhat negated at long ranges. When you need to shoot down helicopters or know the room is full of enemies that rush outside when alarms blare, it can be a great sweeper with tons of FMJ ammo to spare.

Its edge over the counterpart Hampton MPL SMG is utilizing Cyanide-tipped ammunition besides two other alternative bullet types to FMJ. Cyanide-tipped bullets will reduce accuracy of enemies on hit, making it loud but a good answer for long sighted snipers in a large fight.

It doesn't have any sort of possible modifications and lacks in long sight engages while using standard ammunition. The Gordon SMG must be supported by a long ranged rifle or pistol, else it should be used in a single shot manner at long distances and loaded with a strong ammunition to compensate against hectic single foes. It's one of the fallback weapons that come with plenty of disposable ammo and adapt on the fly.

No One Lives Forever 2[]

The Gordon SMG is not a very common weapon compared to other automatic weapon alternatives in the game. It has a very generous ammo stock and high recoil just like the previous iteration. Being a loud option, it's not something you would wield on occasion. However knowing when enemies will show themselves in the open after a successful stealthy infiltration and smart use of explosives or Bear Traps, gun will reward you with tons of kills from choke points and patrols will expose themselves. It's also a reliable choice at late game dealing with Super Soldiers. It's highly suggested to invest in the Marksman ability as a priority for its high recoil then level up Weapon ability when you decide to use this SMG as your main weapon.

Its counterpart Silenced SMG act as an upgrade here and will not burden you with other utilities and gadgets to mass sweep and allow you to pick your targets one by one.

While not as common as M1921 Tommy Gun, The Gordon is a widely preferred weapon of choice for Danger Danger thugs and Czech Army forces. It has very high recoil, large ammo stock and pretty low damage at the face of sturdier enemies. The Gordon SMG always must be used by lean peeking or crouched behind a corner else long distance enemies will chip away your health and armor in a blink by abusing weapon's shortcomings. The Silenced SMG somewhat acts as a small upgrade with its lower recoil and near silent gunfire noise allowing you to take your time with free short bursts from range until getting noticed.

A popular submachinegun due to its reliability and stylish design. While holding it by the side-mounted magazine is not recommended, most agent do. 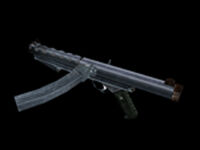