The Operative: No One Lives Forever
The Geldmacher SVD (SVD Dragunov) is a sniper rifle that is chambered for .308 caliber ammunition and is one of the most potent sniper rifles in The Operative: No One Lives Forever, with an exclusive three levels of zoom on its scope. It can use FMJ and phosphorus ammunition, and an upgraded scope featuring night vision can be fitted.

Being a loud rifle shooting at groups generally result in retaliation fire but the power and fire rate allows you to defend yourself when you missed. Sight isolated single targets at very long distance can be wiped right out by a clear shot without any risk of getting swarmed by rushing thugs and grunts who heard the noise or witnessed their friend getting killed.
As long as you pick the right target and don't miss, loud nature of the rifle stops being a disadvantage. When given pace enough for rifle noise to mitigate at distance and not allowing anyone get away alive from your sights by scoring a headshot, your presence won't be noticed. Increased zoom scale allows a better correction at long distance and sheer fire power helps you to recover even if missed at first attempt.

This Sniper Rifle is used by various H.A.R.M. grunts (especially the high ranked ones in Pacific and Alps) and operatives, including Dmitrij Volkov and two of the three female Elite Guard near the end of the game. It is also used by Cate Archer. 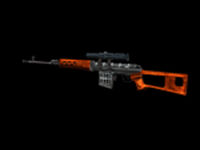 Retrieved from "https://nolf.fandom.com/wiki/Geldmacher_SVD?oldid=8962"
Community content is available under CC-BY-SA unless otherwise noted.