The Elite Guard consists of three female characters who are all somewhat similar to Cate Archer herself: good-looking, but extremely lethal operatives. They are featured in many cutscenes, where they appear to be extremely bored. They are encountered by the player in Scene 1 of A Very Large Explosion. They use high-powered long range rifles packed with phosphorus or FMJ ammunition. For instance Geldmacher SVD preferred by Asian and Black elite members while an AK-47 is wielded by Blondie elite. They're also capable of throwing grenades.

They have a lot of Body Armor but mediocre hit points that scale up with the difficulty. Their unexpectedly sturdy armor making them hard to kill, while they have no difficulty in killing you with a few quick shots. A quick trigger finger, positioning and some wits about weaponry are needed for taking out the three of them. At high difficulties they can easily endure multiple heavy explosions, several bolt and sniper shots and still take you down with near perfect accuracy.

They are housed in the lair of Baroness Dumas in the West German Alps. There to alleviate their boredom, they had various magazines and a Monkey. They also had various posters including a vandalized one of Inge Wagner. 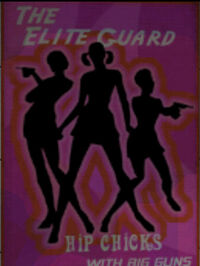 Retrieved from "https://nolf.fandom.com/wiki/Elite_Guard?oldid=8501"
Community content is available under CC-BY-SA unless otherwise noted.