No One Lives Forever

Contract J.A.C.K. is a sequel (spin-off) to the The Operative: No One Lives Forever and a prequel to the No One Lives Forever 2: A Spy in H.A.R.M.'s Way, even if the game is released after NOLF 2. J.A.C.K. stands for: Just Another Contract Killer. It was developed by Monolith Productions, published by Vivendi Universal Games.

Where as NOLF1 and NOLF2 are stealth based first person shooters, Contract J.A.C.K. does not require stealth or silent takedowns. Most of the gameplay is running and gunning through the missions with emphasis on cover-peek shooting, going in guns ablaze or kiting herd of enemies through chokes while retreating. Game will pit you against enemy groups that are large in numbers almost non-stop, where it was a rare scene at the previous installments of the game to do that unless you made your presence very clear to the enemy.

Enemies capable of flanking you if they hear you reload else you stand a cross path position for too long. They will synchronize their peekshots, make use of grenades when they located you and cover fire for each other when in groups to flush you off. In general, they're much durable and capable of pressing the attack in a coordinated manner. Enemies still react to footsteps and noises just like the previous installments but that doesn't really matter in a bigger scheme as player expected to push through any off-guard moments and most of the time they're aware of your presence before you know it. A scripted trigger will alert them to infiltrate an area from front as player progress or they will come out flocking from previous areas through once locked enemy closets.

Disabling or dispatching enemy groups at key positions with grenades or explosives, required for splitting your attention properly in the long fights. Player have to be resourceful and answer with the right utilities if they can not take cover or position. As game is about ambush fights where you can not evade taking damage and fighting sturdier enemies, it's also generous on offering Body Armor, Bandages and First Aid Kit. Protagonist, John Jack can not search fallen bodies like previous installments so such recovery items can be found almost anywhere with varying rarities throughout missions. When player notice generous amount of recovery equipment, they can be ensured that they will backtrack to the same area or going into a big fight over and over again.

Most of the arsenal carries over from the NOLF2. Most abundant weapon proven to be full-automatic rifles but Jack also can use different weapons with varying effective ranges that player is familiar from NOLF2. However, Contract J.A.C.K also introduces Jack's personal .50 Handgun, a Laser Rifle, Energy Cannon and Corrector that was abscent in the second game, makes a return.

Instead of collecting Intelligence items to increase end of level ranks, the missions in Contract J.A.C.K. contain secret locations with beneficial items such as extra Grenades, Incendiary , Flashbangs and rare ammunition types such as Explosive Shells to sweep clear of an oncoming large raid of enemies easier. The number of secrets found is tallied at the end of the mission.

There is no opening musical credits scene in Contract J.A.C.K. The first mission has a text briefing and a short intro video where Jack finds himself in his first predicament.

Cate Archer makes a cameo appearance, but does not interact with Jack.

After a night of heavy drinking, Jack is apprehended by Franco Syndicate thugs, who are ordered to kill him. Before they can, Jack breaks free from the ropes that tied him to a chair and slaughters the thugs that swarm the building. Before he can leave, he receives a phone call from Dmitrij Volkov, H.A.R.M.'s Director of Executive Action. Volkov tells Jack to report to a job interview at the Roman ruins on Malta. The interview consists of Jack mowing down waves of H.A.R.M. troopers as Volkov taunts them over a loudspeaker. In the end, Jack passes the test and is hired by H.A.R.M.

For his first assignment, Jack must infiltrate a Czechoslovakian military base to figure out why Danger Danger is interested in it. Upon delving deeper into the base, Jack becomes aware that the facility is a secret rocket launch site. Danger Danger is trying to use a Czech rocket to recover Dr. Harij; a H.A.R.M. scientist stranded on the moon after the destruction of H.A.R.M.'s space station in first No One Lives Forever. Although Danger Danger is able to launch a rocket full of their men, Jack commandeers a second rocket and heads to the moon after them.

On the Moon, Jack must fight through Danger Danger goons to get to Dr. Harij. Danger Danger reaches the scientist first and they begin destroying the lunar base to prevent Jack from escaping. Jack reaches Danger Danger's rocket seconds before it lifts-off. The effects of the rocket's propulsion and the base's explosion send Jack floating through space on a collision course with the Sun. Il Pazzo (Italian for "The Crazy One"), leader of Danger Danger, begins dispatching men to kill Jack, but he fails and Jack floats to the other rocket, which had been floating among the debris of the base.

Jack crashes his rocket into the Italian countryside. Il Pazzo is nearby with Dr. Harij and he flees on a gondola. Jack steals a machine gun-equipped Vespa and pursues them. After killing hordes of Il Pazzo's men, Jack arrives at a castle where Il Pazzo is holed up with Dr. Harij. Using cannons positioned around the building, Jack kills the defenders. A long-distance battle ensues between Jack and Il Pazzo as more of his thugs swarm the area. Jack wins, but is not able to kill Il Pazzo completely. After rescuing Dr. Harij, Jack returns to H.A.R.M. base just to get shot by Volkov and left to die. The game ends with Jack rising up and limping toward Volkov's skis with a smirk on his face. It is believed that the ending implied why Volkov is confined in a wheelchair and covered in a full-body plaster cast in No One Lives Forever 2.

Contract J.A.C.K. came with 4 different multiplayer modes, these are namely: Deathmatch, Team Deathmatch, Demolition and Doomsday. Deathmatch is classic free-for-all, while Team Deathmatch is a more team oriented variation of this classic mode. Demolition is a team based bombing mission on a timelimit with interchanging attack-defense roles per round for teams; attackers have to destroy 2 out of 3 target areas and defenders have to keep areas under control until round timer go off or opposing team is eliminated. Doomsday is again a team based match for seeking the scattered parts of the main objective among the map that is a doomsday device; a weapon of mass destruction to destroy enemy team once activated and wins the round. 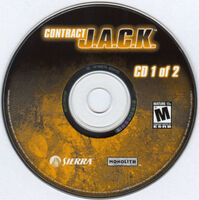 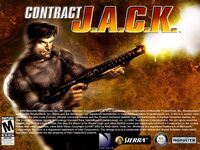 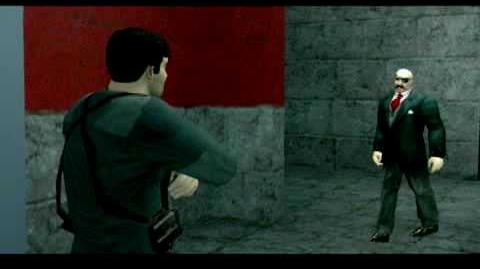