Clark was a former Russian spy and a soldier of H.A.R.M.

Cate first meet Clark and his wife Martha in Grand Caravan Hotel, Marrakesh, Morocco. From the letters Cate found in their hotel room, she discovered that Clark is a Russian spy and is going to leave Martha and go back to his first wife.

A few months later he defected from Soviet Union and joined the terrorist organization known as H.A.R.M. Clark was stationed in the H.A.R.M. Secret Underwater Base in Aegean Sea, which Cate infiltrated to save Magnus Armstrong. Clark was trying to kill Cate, but was unsuccessful and Cate kill him. After she search his body, she found a letter addressed to Martha. 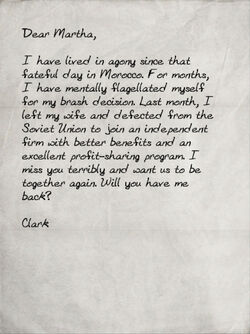 Retrieved from "https://nolf.fandom.com/wiki/Clark?oldid=6084"
Community content is available under CC-BY-SA unless otherwise noted.