The AK-47 or AK as it is officially known (also known as the Kalashnikov) assault rifle is a selective-fire (semi-automatic and automatic), gas-operated fires 7.62×39 mm high-velocity rounds. It features a 30-round detachable magazine. It is developed in the Soviet Union by Mikhail Kalashnikov. It is officially known in the Soviet documentation as Avtomat Kalashnikova. A standard Eastern Bloc military issue assault rifle renowned for its simple design and rugged construction. It is reliable and easy to maintain.

The Operative: No One Lives Forever[]

It is the most powerful automatic weapon in the game and is used by most of the East German STASI guards in the chapter Berlin by Night, by many H.A.R.M. henchmen and one of the three Elite Guards in the later chapters. Also Dmitrij Volkov will wield it against Archer actively in a showdown. It can also be used by the player. The rifle can also use FMJ and incendiary ammunition and can be fitted with a scope that has two levels of zoom.

Due to its rapid fire and relatively high damage, it's a very effective weapon for close quarters fighting. Capable of retaliating at any range and stop large groups in their tracks. However, because of the tremendous noise of the AK-47, it's less suitable for a stealthy approach. It will not be much of a use in enclosed spaces when enemies are capable of hearing loud gunfire noise from a mile away and rush into the area. When fired from claustrophobic rooms, the pierce capabilities of FMJ must be utilized to increase your chances of survival.

As mentioned before, the AK-47 can be fitted with a 2x magnification scope, but due to the huge recoil of the weapon the scope is only of use when going full unleash on distant very large objects, like helicopters. Alternatively you can burst fire at long distance when you located snipers or patrols on your path.

The rifle is commonly used by Czechoslovakian soldiers. It's not entirely an upgrade over the most common Gordon SMG but its long range accuracy may come handy for fending off from corners way better with less kickback upon firing it.

However rare, phosphorus ammunition can be found along the chapters and loaded. To Jack's dismay, it's hardly a lethal hit unless you scored a headshot when facing such durable enemies in mass and it's pretty scarce. General use of phosphorus 7.62x39 caliber ammo to be disable a few enemies with a few taps while you ready a grenade toss and take cover or switch weapons to sweep clear.

Soviet soldiers as well as members of Indian branch of H.A.R.M. and Evil Alliance thugs are armed with AK-47s. Generally a trusted weapon but high gunfire noise will make it somewhat problematic on a breach mission. Preferred in long range fights and returning fire against any sniper or patrols blocking the road at the open. Using this weapon in enclosed spaces generally gets you cornered by attracting guards on yourself while you can clear them from a safe range one by one at the open. Abilities such as Marksmanship and Weapon greatly benefit this rifle and makes it a stable hit long ranged firearm to retaliate from any distance and reload faster.

Phosphorus ammunition is rare as always but having option to increase her weapon damage through abilities, Archer will have no struggle to utilize its damage either way. From body shots, phosphorus ammunition of AK-47 can directly kill foes in low difficulties by a few bullets and disable them for a few good seconds in high difficulties, buying you time to array another action. 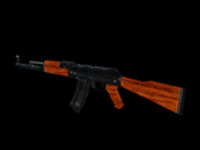 No One Lives Forever weapon model

No One Lives Forever 2 weapon model 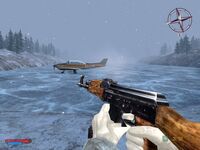